Welcome. I invite you to read and scroll down to visit selections including “The Children’s Home, “The Inner Daughter,” “Wayward Star, Devotional Poems” and the biography.

“The Children’s Home” by Sharon Lia Robinson is now in print and may be ordered from www.sheriarbooks.org or phone them at 1-843-272-1339.

“The stories and poems in this book reflect in memory and imagination my childhood in two southern California children’s homes, from age seven to ten. God was my messenger of faith that someday I could live in a happier place. My prayers were unexpectedly answered when I moved from Vista Del Mar Jewish Children’s Home to the David and Margaret Methodist Home. I soon met Rabbi Michael and Ruth Robinson and their two children, and moved across the country with them to Croton-on-Hudson, New York. There, I began to write poetry. Years later, I became a devotee of Meher Baba and learned of His historical visits to my village in 1931 and 1932.” – Sharon Lia Robinson, Introduction, Afterword and Notes 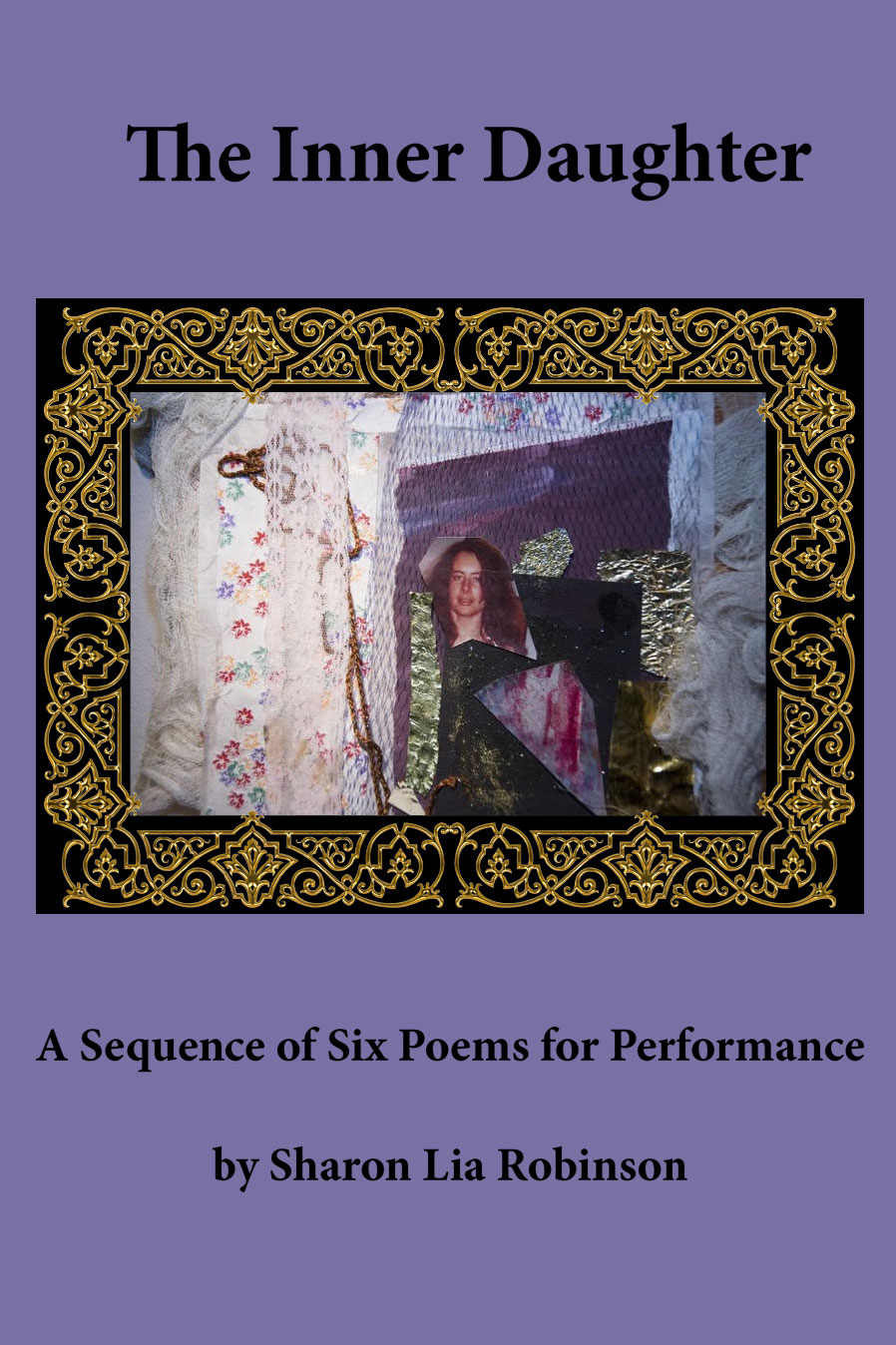 Please click the front cover to download and read The Inner Daughter, a sequence of six poems for performance and libretto.
This experimental performance piece encompasses poetry, dance, music, theatre and visual art. Experimenting with various ways to present the poetry for performance, I believe the most important thing I have learned as an artist is to follow my heart.

This collection includes poems evoking both the Catholic and Jewish traditions with my faith in Meher Baba, the Ancient One.

Here is an excerpt from my poem “His Holy Will” on page 33 in the book.

beg camp revamp
write a letter
get a postage stamp

because you love God

Two documentary films I have directed & produced are  My Journey Toward Wholeness  and Edge of the Sea Gallery (1998-2003).

Since the early 1970’s  I have been been writing poetry, plays, essays, and stories.   Finding spiritual presence informs my work.

My stories  reflect the lives of unconventional outsiders, the search to find acceptance and our mystical journey to wholeness and spiritual redemption.

I have studied and practiced dance with an emphasis on creating a supportive cultural atmosphere for all people, to give ourselves permission to experience the joy of creative movement.

I have shared my  Poetry  and creative dance in liturgical prayer celebrations, secular places and journals.

More poetry I have written is on this website at Meher Baba In My Life, and Rubenesque Landscape.

Inspired by cat companions, Simon and Simone, I have also written stories and poems for children.

I was born in Santa Monica, California.  At age ten, while living in a Methodist children’s home in La Verne, California, I attended the local Jewish Temple Sunday school.  There I met Rabbi Michael and Ruth Robinson and their two young children.

In 1973,  I returned to Santa Monica, where I was a catalyst in the early years of the fat women’s liberation movement, to develop more inclusive concepts of body image.

Between 1973-1977, I wrote essays and poetry for Sister! a Los Angeles feminist newspaper.

During these years, Vivian Mayer and I collected early drafts of the pioneering anthology Shadow on a Tightrope (Writings by Women on Fat Oppression).  My poetry and essays are included in the book.  The anthology title Shadow on a Tightrope is from a line in my poem, “whoever i am, i’m a fat woman.”  (I wrote under the pen name Sharon Bas Hannah at the time).

Between 1974-1979, the process of Jungian psychology became an important  experience for helping me to discern my authentic self.  During those years I met with  Jungian therapists and attended Jungian seminars in Los Angeles, California, in New Haven, Connecticut and Cambridge, Mass.  I began to feel more self-validation in my creative writing.

During this time, I began to focus on my poems, creative dance and stories.

In 1977, I discovered the poetry of Paul Eluard and other artists at the home of my poet friend, David Cumberland  (David Johnson).  Encouraged by David, I began to discover my authentic calling to be an artist.  I began to see myself more strongly in that light.

In 1978, having been accepted into the the Theater Project of the Goddard-Cambridge Graduate Program in Social Change, Cambridge, Massachusetts, I moved to the Cambridge area. My graduate work in the theater program there focused on writing experimental plays and poetry.  I also studied Middle Eastern and creative dance and began to perform and teach dance.

My 1984 Master’s Degree from Goddard/Vermont College is in Theater and Creative Dance, with an emphasis on creating innovative roles that honor the lives of full-figured and unconventional women.

My archives are in Schlesinger Library, Radcliffe College, under my pen name, Sharonah Robinson.  The collection there includes the early drafts of Shadow on a Tightrope; my 1984 Master’s project (Three Plays and Notes on Dance), along with my poems, stories, miscellaneous notes and films.

I have also donated to Radcliffe Esalen Journey (1986-1987), the journal I wrote during my four month stay at Esalen Institute.  I continue to donate more of my writings to this collection, with gratitude that my work has “a safe home.”

In 1995, I traveled to India on a spiritual pilgrimage to visit the Avatar Meher Baba Center.  I went to Meher Baba’s tomb and visited with His close disciples.  After this journey, I began to exhibit my visual art and to reclaim that creative aspect in my life.

I have collaborated throughout the years with photographers to document my life.  Beginning in 1997, I collaborated with photographer Steven R. Johnson on Rubenesque Landscape, with photography by Steven and poetry by me. We have shown this collection in galleries and art centers, including Metropolis Gallery/Seattle, Edge of the Sea Gallery and Centrum/Port Townsend, Washington.