See entire film here (or scroll down to view excerpts).

Film excerpt of Sharon Lia Robinson, Poetry and Dance, Edge of the Sea Gallery.  length 1:53
I, Sharon, wrote this poem “The Will To Go Forward Is Connected To The Chance To Move”  in August, 1978. The poem is inspired by Paul Eluard.  At the time, I was beginning to create innovative dance, poetry and theater to reflect compassionate, artistic portrayals of full-figured women. In 2008, two decades after the poem was written, I produced this dance poetry film.

Edge of the Sea Gallery (1998 – 2003) was a sanctuary for the arts and self-actualization.  During the five years of our storefront experiment, the center was an alternative place for dance, music and poetry readings. The sixty nine minute documentary film features artists, poets and writers from Port Townsend, Washington. The gallery was my vision to show the work of marginalized artists as well as friends who were more widely known. This documentary presents archival interviews with the artists, our work and gallery events. The film includes interviews with Steven R. Johnson (gallery co-founder), Robert Komishane, Alexandra Lord, Mike O’Connor and myself (Sharon). I held the storefront space for five years, because I believed and still do believe in my vision to create more visibility for marginalized and experimental artists. The gallery opened in 1998 and closed in 2003.  I see my work on this project as a way to share my journey and to inspire others. This film is a labor of love and a tribute to the artists involved. 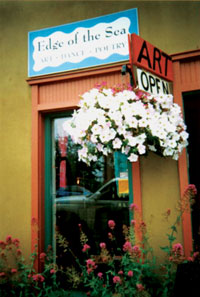 Dr. Fred Whitehead, a writer and and progressive arts advocate from Kansas City, Kansas, said about the film, “You’ve documented a small institution that created and preserved culture — something that I’ve urged everyone to do for years.”

On April 15, 2010 Northwind Arts Center in Port Townsend, Washington hosted the premier of my film documentary Edge of the Sea Gallery (1998-2003). The event was a happy reunion for me of my old and new friends. Here are some of the people who were present. Photographs by Jill Buhler.